After you move to Beverly Hills, a huge dilemma will come up regarding your children’s future: which school should you send them to? So, because we understand that you are probably stressed out with packing, planning, sorting through and generally losing it during a moving process, we’re here today to shorten the time of Googling and researching private and public schools of Beverly Hills.

Beverly Hills has six public schools, ranging from kindergarten, over grade 9 to grade 12. The minority enrollment in these schools is 26 percent and the student : teacher ratio is 17:1. For this short post, we will be including rankings, lists and reviews from parents and teachers in order to paint a more realistic picture of these establishments. We hope that we will make this choice easier on you, as we will present the public elementary schools in this post.

Beverly Vista is a public elementary school located in the south of the Beverly Hills, on South Elm Drive and operates within the Beverly Hills Unified School District. It has a total number of 686 students and 43 teachers, which has stayed mostly consistent over the years. The student : teacher ratio is 16:1, lower than the California average. The minority enrollment is 30 percent, mostly Asian, which is lower than the California average of 75 percent. Beverly Vista Elementary covers grades from kindergarten to 8th grade and was the receiver of the Blue Ribbon School in 2005.

The reviews of the students tell us that this school is fond of its students and that both elementary and middle school teachers are caring, kind and fair. They set aside extra time to work on difficulties which the students may have even after school hours. The students also point out that they had been surprised by how nice and welcoming their peers are, despite the common stereotype of a rich, Beverly Hills neighborhood. Though, it has been mentioned that it is a bit difficult to fit in during the first month or so after a move, due to the close relationships of all the students. As for the school program, the children are satisfied, saying that they enjoyed the arts and music programs because of its advanced nature. There have been numerous extracurriculars mentioned, from sports, student government to technology. 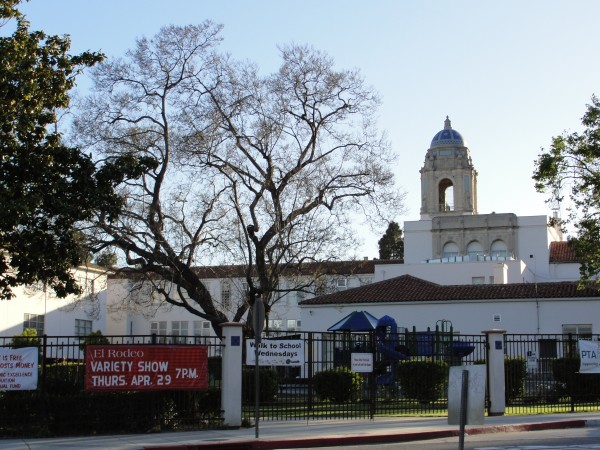 This public school is located in the south-west of Beverly Hills, on North Whittier Drive and it is also in the Beverly Hills Unified School District. El Rodeo Elementary School has a number of students is 675 and has been rising slowly, by five percent, during the last five years. The teacher population of 45 has grown by 13 percent in the last few years, as well. The student : teacher ratio is 16:1 and the minority enrollment is thirty percent, mostly Asian, as well. El Rodeo Elementary School of Beverly Hills covers grades from kindergarten to 8th grade.

El Rodeo Elementary School has a number of divided reviews. While some parents seem unsatisfied with the other parents and their involvement in their children’s education, as well as donations to the school, all reviews agree that the program at the school is outstanding. The topic of the teachers is also a positive point in all parent and student reviews, as many people mention their favorite instructors and the great experiences and teachings in their classes. The school is remembered fondly by all its alumni for the great curriculum and the extra-curricular activities which they enjoyed greatly.

Another public school in Beverly Hills is Hawthorne Elementary School

Located in the north of Beverly Hills, on North Rexford Drive, Hawthorne Elementary School, like the other schools which we’ve mentioned, it’s in the Beverly Hills Unified School District. It has 602 students, and has had a similar number in the last five years. The population of 39 teachers has experienced a growth by 8 percent in the last couple of years. Nowadays, the student : teacher ratio is 15:1, which is
lower than the California average. The minority enrollment in this public school

is 18 percent, and the majority of the minority population is Asian, like in the other schools in Beverly Hills. Hawthorne Elementary covers a curriculum from kindergarten to the 8th grade.

The reviews of parents tell us that they are widely satisfied with Hawthorne Elementary form Beverly Hills. They call in a ‘five star school in every way’ and speak highly of the teachers, who are also alumni of the school and have been working in education for a long time. The parents also mention that the teachers are dedicated to the school and invested in their students’ achievements and successes. The students’ scores show this, as they are all high, year after year. The reviews also mention that the public school’s principal has made herself available to parents and has done everything in her power to help with struggling students at the school, in order for them to achieve their goals. There are also numerous reviews talking about the extra-curricular activities which the school provides.

This school is located on 8701 Charleville Boulevard, in the southeast of Beverly Hills and it operates in the Beverly Hills Unified School District. Horace Mann’s population of 573 students has remained mostly flat during the last five years, while its population of teachers, 37, has grown by 8 percent in the

last couple of years. The student : teacher ratio of this Beverly Hills elementary is 15:1, which is lower than the California average, as well. The minority enrollment is 37 percent and the majority of those students are Asian. Horace Mann Elementary covers the grade range from kindergarten to 8th grade.

The reviews of parents tell us that they are satisfied with the schools teachers, as they are kind and involved in their students’ growth. They praise Horace Mann Elementary, as it had encouraged their children to aim higher, into award winning on science and debate programs. The parents also say that the administrators are very open to questions and that they go out of their way to find solutions. They are satisfied with both the curriculum and the extra-curricular activities.

We hope that this post has helped you decide on which elementary school to choose for your child! If you’re looking for a different grade group, stay tuned for our next post about high schools!